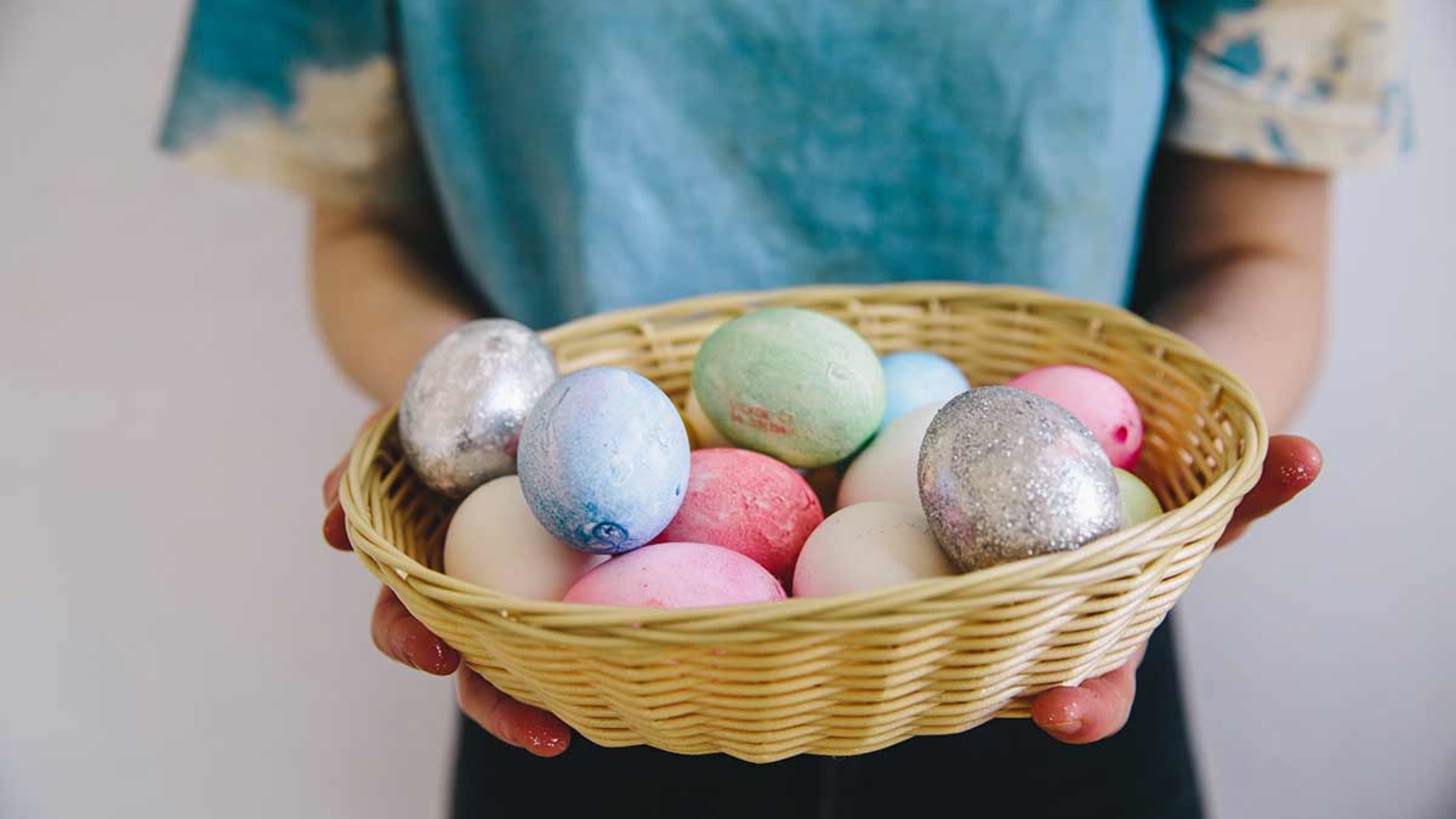 Despite the fact that our children are grown the annual tradition in our house of coloring Easter eggs is still very much alive. This year was no different as our daughter came home from college and our son and his fiancé joined us for a couple of hours of dye-laden fun. And every year we laugh at some of the same Easter memories….including the preschool Easter egg hunt at which my son Josh became an avowed conservative!

The story goes like this: Josh was four and already had a competitive streak – he came by it naturally. An Easter party was planned for his class with an Easter egg hunt as the main event. Josh was excited and planned to scoop up as many as he could. When the time came my little man was off and running…he was a blur of activity as he literally ran himself into a sweat filling his basket. While the other kids were moving at a leisurely pace Josh got more and more excited as the fruit of his labors filled his basket to the point that he literally had to cradle it in both arms to keep the eggs from falling out. When the hunt was over Josh had clearly excelled as a hunter of colored eggs! All of the baskets were lined up side-by-side and the children went inside for a party. But when Josh came out to collect his hard-won reward he found that a well-meaning adult had decided that a redistribution of eggs was necessary to keep some of the other children from feeling bad. His basket now held no more than anyone else’s. In his own words, “at that moment a conservative was born!”

We laugh at that story – and we even caught part of it on a five-second video this year. But the premise of redistribution of wealth is no laughing matter. Author and Senior Fellow at Stanford’s Hoover Institution Victor Davis Hanson famously said “History has shown that a government’s redistribution of shrinking wealth, in preference to a private sector’s creation of new sources of it, can prove more destructive than even the most deadly enemy.” The impetus for economic growth is the individual’s personal belief that if he or she perseveres and is willing to take risks that the ultimate outcome is prosperity. But when the business pro forma forecasts a government-forced redistribution of that prosperity then the motivation to succeed languishes.

Don’t get me wrong here – this is not a call to ignore the plight of the less fortunate. In fact, charitable giving is one of the hallmarks of western society. And if you look closely you will find that it is actually conservatives who are more giving as opposed to liberals. Arthur Brooks, author of Who Really Cares, offers data that indicates that conservative households give 30 percent more to charity than those headed by liberals. New York Times columnist Nicholas Kristof, a self-professed liberal, cited Brooks and the “generosity index” from the Catalogue for Philanthropy which shows that conservative states have a higher rate of giving to nonprofit organizations than do left-leaning states. Kristof’s closing line in his article “Bleeding Heart Tightwads” was “Come on liberals, redeem yourselves, and put your wallets where your hearts are”.

But liberals don’t do that. Their version of philanthropy is to protest success and demonize capitalism. To a liberal to give is divine, just as long as the giving is to government so that government can redistribute the income as government sees fit. That liberal bent toward redistribution is playing out right before our eyes….even now.

Obamacare IS redistribution and is having, and will have, disastrous effects on the US economy. At its core Obamacare is a restructuring of individual debt-to-income ratios by mandating coverage, providing subsidies (fueled by tax dollars) and placing burdens on state governments. The attempt to level out income equality is having the reverse effect for most citizens. The 800-pound gorilla in the room is the loss of income suffered by 80% of taxpayers who are seeing a decrease in their income in the form of higher premiums and deductibles, decreased work hours by employers to avoid mandated coverage, and companies choosing not to hire based on the cost of mandated coverage. The Brookings Institution recently completed a study that shows that whereas very few will gain….most will lose.

Another means by Democrats liberal policies have hit home is in the arena of public employee’s salaries. This year, as the Alabama Senate wrestled with the budget process, the intent had been to seek a means to give public education employees a modest raise to match the one given in the previous fiscal year. But the budget took a dark turn when it became apparent that Obamacare had created an unavoidable deficit in the cost of public employee health benefits. The legislature was then faced with the reality that to give a raise would likely result in an offset by increased out-of-pocket premiums. In order to prevent a loss of income the legislature wisely chose to fund the increased insurance costs. As a result, instead of a raise our teachers maintained their current levels of income. Redistribution on a grand scale such as that thrust upon the nation by Obamacare is sending negative ripples across the nation.

I am for hard work, ingenuity, the building of a better mousetrap, and the promise of a free market to reward the brave. Too often it is the bleeding heart of liberalism that crushes that spirit.