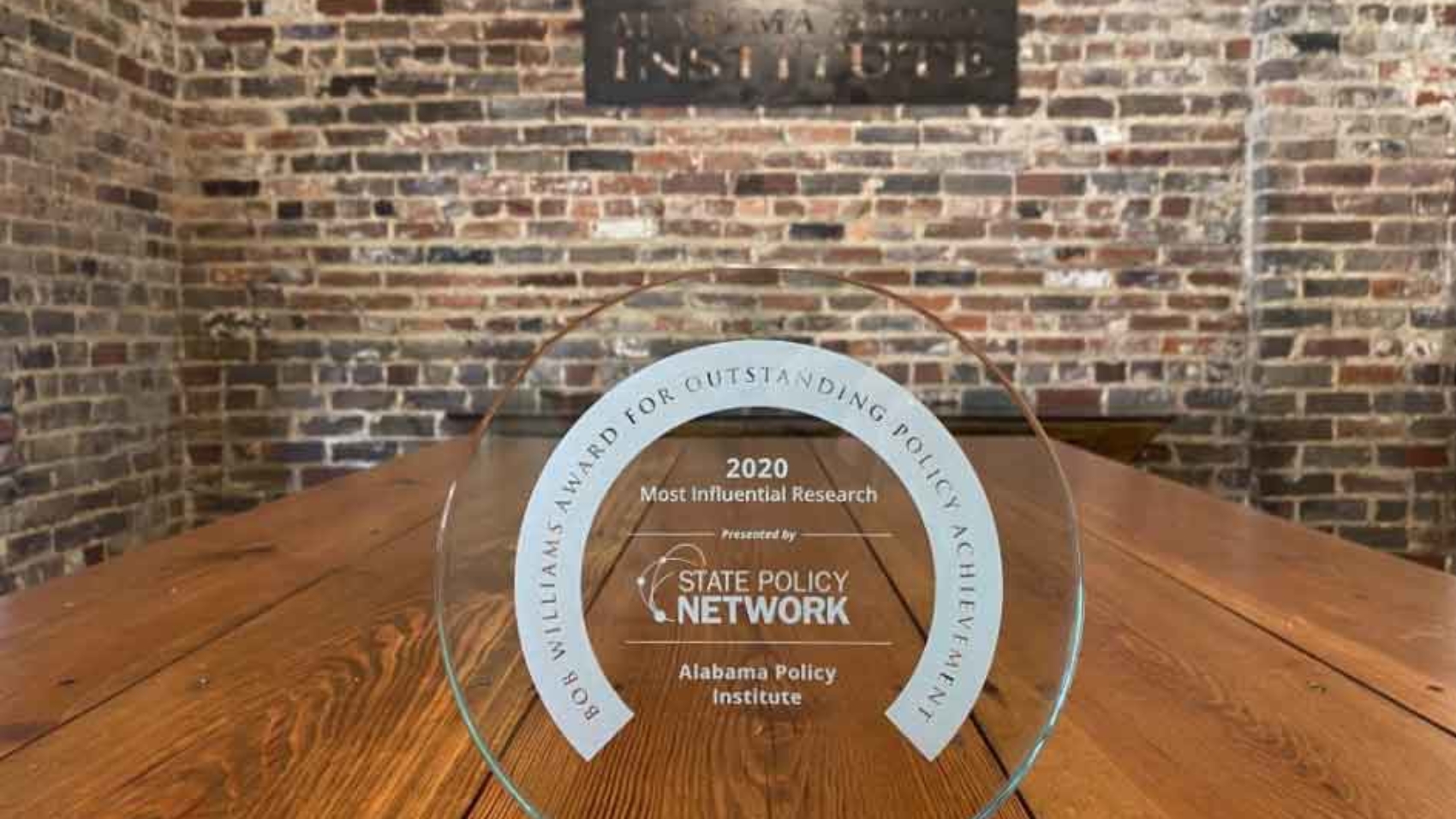 As part of the State Policy Network’s (SPN) annual meeting, the nationwide organization made up of state focused education and research institutes (also known as think tanks), announced that Alabama Policy Institute (API) had been awarded the “Bob Williams Award for Most Influential Research.” Specifically, API’s research entitled “Healthy Citizenry, Healthy Economy, Heathy Society” received the most votes to earn the coveted most influential research title. API’s research considered the impact of the COVID-19 related shutdown on civil liberties and the Alabama Department of Labor’s (ADOL) response to the economic downturn. API was also named a “Communications Excellence Award” finalist for its education campaign called #DeadLast.

The award-winning research, which was requested from API by State Senate President Pro Tem Del Marsh, was given to the Governor’s Coronavirus Taskforce and was personally delivered to ADOL by Sen. Marsh.

“I am thrilled to learn that our peer organizations around the nation have chosen to honor the hard work and dedication of API to achieve good public policy outcomes for all Alabamians,” commented API President Caleb Crosby after being notified of API’s selection for the award. “API works every day to be a watchman, a check on state government, for the people of Alabama. Earning this award signals that we are fulfilling our mission and making a real difference in our state.”

Prior to API’s research, the Alabama Department of Labor only required someone to claim they were not working due to COVID-19 in order to receive unemployment benefits, including the additional $600 weekly payout provided by the federal government’s CARES Act. API challenged this broad assertion and called on the Department to reconsider its stance on the issue in order to limit fraud and abuse of unemployment benefits. API also urged ADOL to use its regulatory discretion to ensure that the new benefits (creating an effective hourly rate of $21.87) did not have an adverse effect of causing individuals to refrain from returning to work, or quitting if they were working, because the benefits may have been more than the employee’s normal wages.

Due to API’s efforts ADOL reversed course on its policies related to how someone is considered qualified to receive unemployment benefits. Just two days after the API report was released, the Department issued a warning along with comments from Labor Secretary Fitzgerald Washington which clarified that deciding to leave work or failing to return to work in order to collect increased unemployment benefits may qualify as fraud and be subject to prosecution. “It’s important for workers to know that if their employer reopens or otherwise calls them back to work, they must do so, unless they have a good work-related cause,” commented Washington according to the Department. Thus, ADOL clarified that even with new benefits available as a result of the CARES Act, the criteria to receive unemployment compensation still required an employee to be involuntarily separated from his or her employer. Such an action ensured that laying out of work unnecessarily didn’t allow employees to potentially earn more to not work than they would earn if they were working.

“Unemployment should be reserved only for those who truly need it because they lost their job and should not be inappropriately taken by those who don’t want to work,” said API’s Director of Policy Strategy and General Counsel Phil Williams, a lawyer and former state senator. “My goal every day is for API to do all we can to make government work better and to keep it from overstepping its bounds. We are honored to receive the Bob Williams Award as it highlights the success of our daily efforts.”

API was officially announced as the most influential research award winner as part of SPN’s Annual Meeting, which was scheduled to meet this week in Chicago, but due to COVID-19 was conducted in a virtual format. Finalists for the award, and a description of their research efforts, can be found here on the SPN website. An SPN video highlighting API’s efforts can be found here.

According to SPN, the Bob Williams Awards for Outstanding Policy Achievement celebrate state think tanks doing exceptional work to develop and disseminate credible policy research and ideas that can help states implement free-market solutions that will have national impact. The most influential research category recognizes the organization whose original research achieved a high level of influence in academia, media, or policy-making arenas.

API was also named a finalist for the SPN “Communications Excellence Award for Influential Marketing Campaign.” API’s #DeadLast public awareness campaign and messaging initiative was chosen as an award finalist for highlighting Alabama’s last in the nation education rating and advocated for specific education choice reforms. Nearly 300,000 people viewed an API cartoon video emphasizing the poor ranking. After API’s coining of the phrase “dead last” the term was used in relation to education in Alabama by media reporters and elected officials across the state. You can learn more about the #DeadLast Campaign nomination here.