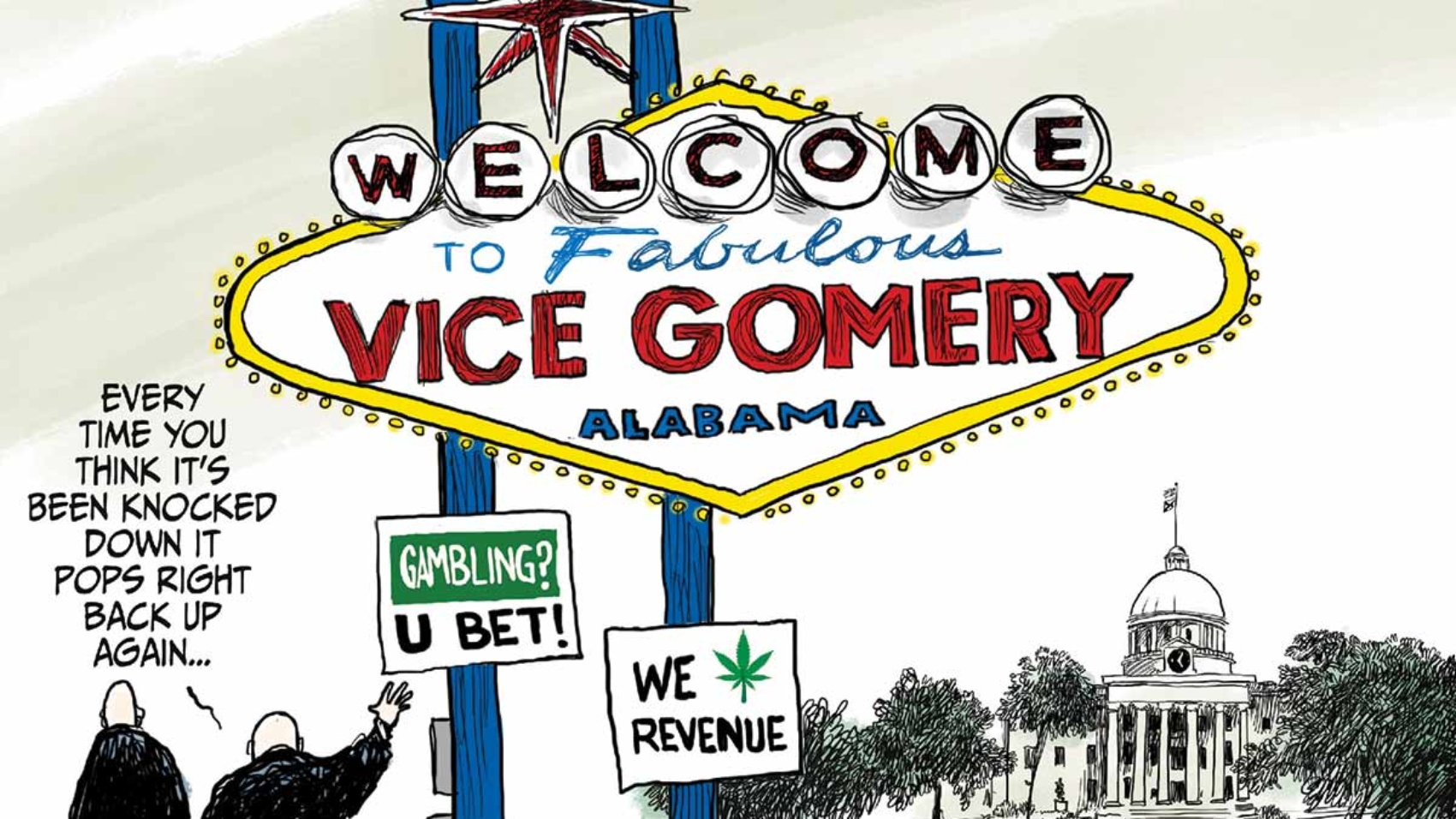 It has been said that the definition of insanity is doing the same thing over and over and expecting a different result. When it comes to casino gaming Alabama is reaching new heights of this type of insanity.

Governor Ivey has stated most recently that gambling is here so therefore we should bring it out in the light of day, give them everything they want, and tax it. Gambling is here solely because it has been openly ignored despite being illegal. If someone continually breaks the law, then they should not be rewarded. Governor Ivey and the Alabama Legislature therefore should not reward the gambling industry’s pattern of continually defying Alabama law by passing pro-gambling legislation and rewarding a history of bad behavior. Gambling has long been illegal in this State. An exception exists for “charitable bingo,” which gambling establishments like Greenetrack, VictoryLand, and the Birmingham Race Course have tried to use over the last 15 years to keep themselves in business. You don’t need to be a lawyer to know that “charitable bingo” doesn’t apply to electronic slot machines.

But if you need a formal legal opinion to persuade you, then know that the Alabama Supreme Court has ruled on that matter many times. For instance, in 2006, the court held that the Birmingham Race Course’s machines were “slot machines,” which are illegal under Alabama law, “as to those who pay to play them.” From 2013 to 2016, the court repeatedly heard cases arising from the seizure of VictoryLand’s machines, ultimately concluding that the machines were illegal. (I happened to be working on the court as a law clerk during that period.) And finally, if the previous cases were not enough to settle the issue, the court ruled again in 2016 that Greenetrack’s machines were not “bingo machines” but were instead more like slot machines and therefore illegal.

How many times did the gambling industry need to be told the same thing before they got the message? The Alabama Supreme Court asked the same question at the end of the VictoryLand and Greenetrack cases, stating,

“There is no longer any room for uncertainty, nor justification for continuing dispute, as to the meaning of [the term ‘bingo’]. And certainly the need for any further expenditure of judicial resources, including the resources of this Court, to examine this issue is at an end. All that is left is for the law of this State to be enforced.”

But like a pouting child that keeps throwing a temper tantrum, the gambling lobby has continued to defy the Alabama Supreme Court’s rulings. For instance, immediately after the Alabama Supreme Court issued its final decision in the VictoryLand case, VictoryLand reopened with the same kinds of electronic slot machines that Alabama Supreme Court had just declared illegal. How could it get away with this? The answer is simple: the state and local governments refused to enforce the court’s decisions. As Alexander Hamilton wrote in Federalist 78, the judicial branch is the “least dangerous” branch of government, partially because it has “neither FORCE nor WILL, but merely judgment; and must ultimately depend upon the aid of the executive arm even for the efficacy of its judgments.”

Having a law that criminalizes gambling and a court that orders them to stop won’t do anything if the executive branch doesn’t enforce it. That is exactly what happened in Alabama when former Governor Bentley stripped the State of its power to enforce gambling laws. Consequently, the gambling industry has continued to break the law and taunt the State as it does nothing to stop them.

So after repeatedly being ordered by the Alabama Supreme Court to stop, the gambling industry has not only ignored the court, but it has continually pushed for gambling to be legalized on a broader scale. Last month, the Alabama Senate rejected Senator Del Marsh’s gambling bill, but this week, true to form, the gambling interests were successful in rekindling their cause in the Senate. Part of Senator Marsh’s bill included allowing VictoryLand, the Birmingham Race Course, and Greenetrack—the same entities that kept breaking the law—the right to operate. Governor Ivey appears to be in support of such legislation, stating recently through her spokesperson that “gambling already happening in our state. In fact, it is rampant, and much of it is illegal. The governor feels strongly that we need to shine a bright light on these activities, control and regulate it and make sure the people of Alabama are the beneficiaries.”

Policy considerations aside, doesn’t something seem wrong about that? Even if the the gambling industry has a point, it should not be rewarded for continually breaking the law for years. Instead of rewarding the gambling industry’s bad behavior, it is well past time for the State to enforce the laws already in existence. Failing to do so undermines the State’s authority and perpetuates the delusion that the same gambling institutions that have continually broken the law will stop breaking the law once they get what they want.