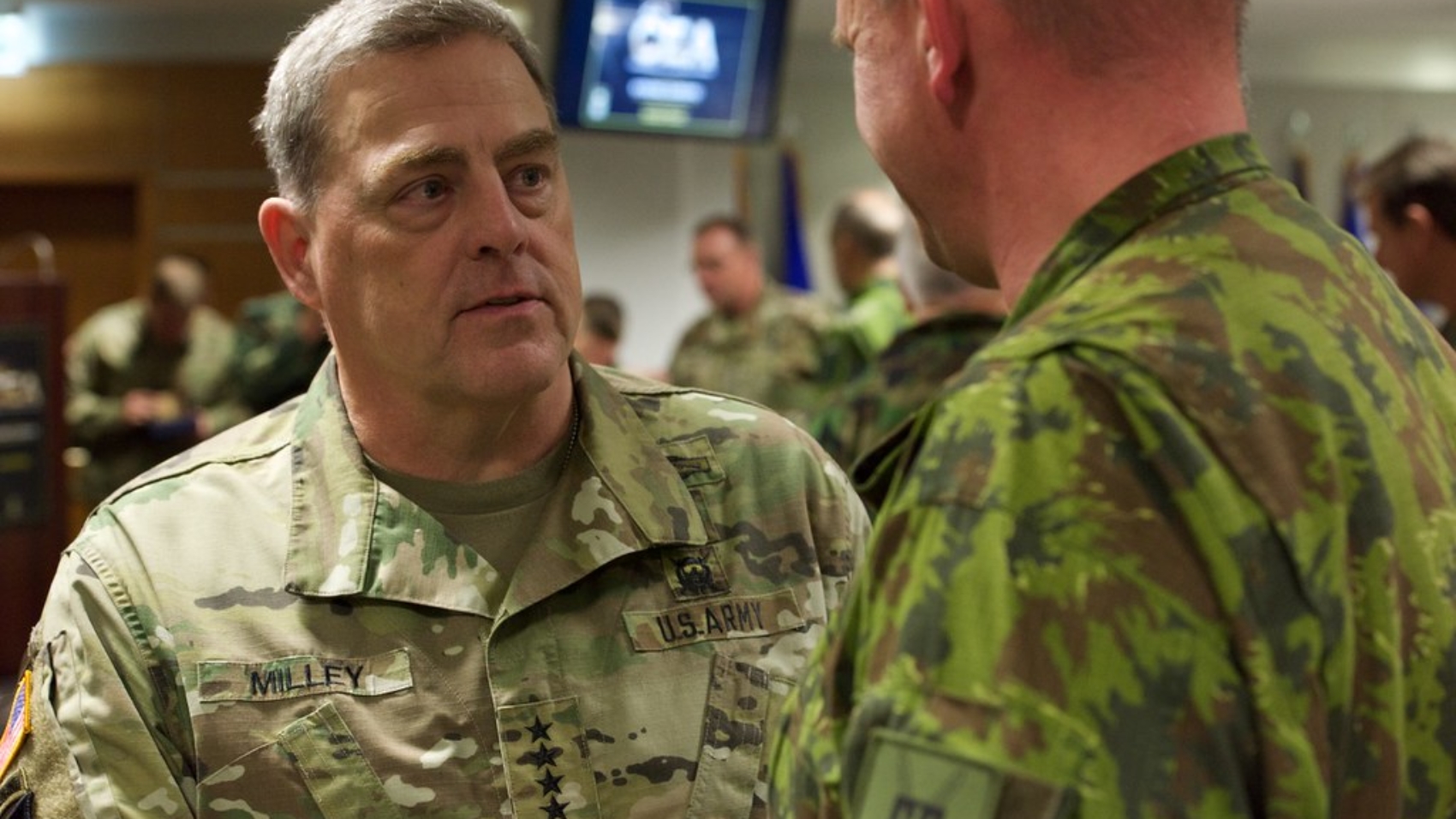 So said the Chairman of the Joint Chiefs of Staff, Gen. Mark Milley, last year as he accepted responsibility for failing to stay out of politics, one of the fundamental duties of every military officer.

He publicly apologized for doing what was widely condemned in the media as an egregious breach of that duty:  He had allowed himself to be seen walking to church for a photo op with President Donald Trump moments after their path through Lafayette Square had been cleared of George Floyd protestors.

The optics were not good.  For many, the imagery of the nation’s top general walking alongside Trump in his combat fatigues against the backdrop of a racial justice protest represented a dangerous politicization of the military at a time of widespread civil unrest.

And for that, Milley apologized.

In his mea culpa commencement address at the National Defense University following the incident, Milley said it “sparked a national debate about the [proper] role of the military in civil society.”

And he admonished the graduates that senior military leaders, including himself, “must hold dear the principle of an apolitical military that is so deeply rooted in the very essence of our republic.”

“It’s not easy,” he said, “but it may be the most important thing each and every one of us does every single day.”

Milley called the incident a mistake and promised he had learned from it.

So it’s surprising that Milley now finds himself at the center of another political firestorm. A bombshell report dropped this week, containing explosive allegations about Milley’s conduct after the Jan. 6 rally-turned-riot at the U.S. Capitol.

In their upcoming book, Peril, journalists Bob Woodward and Robert Costa report that Milley was deeply worried that President Trump had suffered a “serious mental decline in the aftermath of the election” and might “go rogue” by starting a war with China.

So, according to the book, Milley single-handedly assumed responsibility for “overseeing the mobilization of America’s national security state without the knowledge of the American people or the rest of the world.”

Based on the book, media outlets have reported that Milley convened a secret meeting of senior military officials at the Pentagon on Jan. 8 to instruct them not to act on anyone’s orders to launch a military strike, including the use of nuclear weapons, without his involvement.

The book also reportedly recounts a telephone conversation between Milley and House Speaker Nancy Pelosi in which Milley supposedly expressed total agreement with Pelosi that Trump was dangerously “crazy.”

Even more alarming is the book’s assertion that Milley took it upon himself to back-channel with China’s top general in the wake of the Capitol riot. Milley allegedly reassured the Chinese general that the U.S. was not planning a military strike of any kind and promised he would personally call to put Beijing on alert if ever there were an imminent U.S. attack.

If any of this is true, it raises legitimate concerns about actual military entanglement in political affairs at the highest possible level. And the implications could be far more serious than the perception created by last year’s Walk-gate.

First, the alleged conduct skates awfully close to violations of the Uniform Code of Military Justice. Some members of Congress have already demanded that Milley be court-martialed. The UCMJ applies to all active-duty uniformed service members. And, to borrow Milley’s own words, the Chairman of the Joint Chiefs is “not immune.”

For example, any active-duty commissioned officer who uses “contemptuous words against the President” is guilty of violating UCMJ Article 88.  Did Milley’s call with Pelosi cross the line?

Instructing other military officers to disregard the lawful orders of the commander in chief could be charged as attempted mutiny or sedition under UCMJ Article 94. But is that what Milley did? Or did he just remind everyone, as explained by his spokesman, to follow “long-established and robust procedures” before anyone actually pushes the button?

And what about calling China’s top general? If Trump’s deliberate political strategy and foreign policy was to maintain a bluff—that is, to keep China on edge about the possibility of a U.S. strike—could Milley’s reassurance to his Chinese counterpart amount to espionage under UCMJ Article 103?

Under that statute, it is a crime to communicate “intelligence” or “a major element of defense strategy” to a foreign government with “reason to believe that it is to be used … to the advantage of a foreign nation.”

So did Milley unilaterally subvert the president’s defense strategy to the advantage of China? Or was this call, as described by his spokesperson, consistent with his normal duties and responsibilities “conveying reassurance in order to maintain strategic stability?”

The prospect of a court martial seems highly unlikely. More recent reports from eyewitnesses appear to contradict the initial reporting, or at least put it in perspective. That would make any case against him difficult to prove.

But set the potential UCMJ issues aside.  Of much greater national consequence is whether Milley, who took an oath to support and defend the Constitution, contravened the fundamental Constitutional tenet of civilian control of the military and took political affairs into his own hands.

Predictably, the left is exalting Milley as a hero who has kept the nation from the precipice of nuclear war.  And the right is deriding him as nothing less than a traitor to his country.  All while Milley and the Pentagon are trying to downplay his actions as routine, run-of-the-mill stuff for the nation’s highest ranking military officer.

Perhaps. But whatever the real facts turn out to be, this controversy is a sober reminder of the fragility of our constitutional order:  The Constitution guarantees our freedom only insofar as those entrusted with great power adhere to the principles it embodies. Principles like the rule of law, representative government, and, most certainly, civilian control of an apolitical military.

So it is up to us, the People—and to the Press—to assert and defend the supremacy of the Constitution. We do that by holding our leaders accountable and answerable. That’s the only way to compel their adherence to the Constitution and its most fundamental precepts.  We must constantly remind our leaders: They are not immune.

As Milley said, it may be the most important thing each and every one of us does every single day.

Bryan Taylor is an Iraq War veteran, former state senator, and a Distinguished Fellow of the Alabama Policy Institute.

Bryan Taylor is a Distinguished Fellow for the Alabama Policy Institute