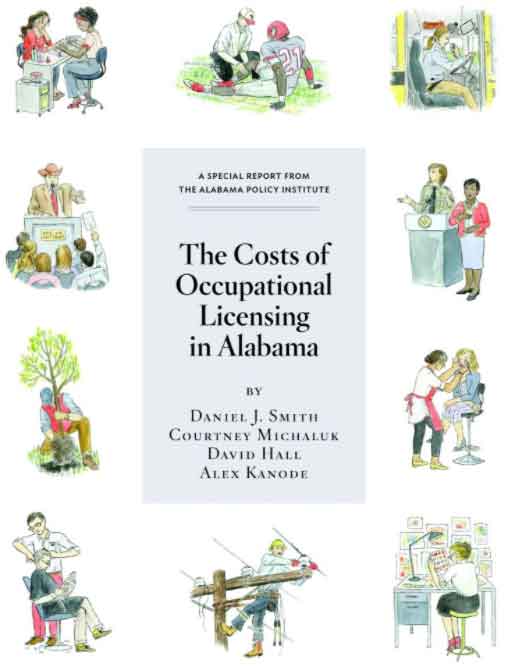 An occupational license is essentially a government permission slip to do certain work. In Alabama, before one can become a hair braider, cosmetologist, shampooer, massage therapist, auctioneer, pest control worker, and so on, one must first jump through a variety of hoops—attending classes, taking exams, and paying costly initial and recurring fees—mostly set at the state level and throughout the course of one’s career. Alabama licenses a total of 151 occupations, covering over 432,000 Alabama workers, which represents over 21 percent of the state’s labor force. The report estimates the total initial costs of occupational licensure, excluding the educational costs, to be $122 million.

Bruce Locke, a retired auctioneer from Toney, Alabama, shared his hardships as a small-business owner affording his state-required permission slip to do the job he was educated to do. Locke stated, ”It seemed like the board simply wanted my money. Unhappy with the way I was treated, I gave up my license, and eventually sold my business. There are a lot of states who don’t have licenses for auctioneers, and they’re doing just fine. If Alabama were to eliminate the board, I would definitely go back to work as an auctioneer. I’m just unhappy with the way all this happened, and I hope that this gets addressed soon.”

Courtney Michaluk, policy analyst at the Johnson Center and co-author of the report, declared that the time is now for reform in Alabama: “Our report details the full costs of licensing in Alabama, from education to required training to fees, of all licensed workers in the state. Occupational licensing reform has become such an important issue on the national level, and states are starting to consider whether licenses to work are really necessary and whether this practice threatens individual economic freedom.”

Dr. Edward Timmons, Associate Professor of Economics at St. Francis University, has conducted extensive research on occupational licensing reforms in the states—especially in Alabama. At Tuesday’s event, Dr. Timmons presented compelling evidence on the harmful affects of occupational licensing across the country: ”Occupational licensing has grown from affecting 5% of workers in 1950 to as much as 29% today. Licensing increases prices for consumers but there is little evidence that it enhances quality. My research suggests that the elimination of barber licensing in 1983 in Alabama increased competition in the marketplace as measured by decreases in barber wages and reductions in the number of cosmetologists.”

Given the substantial costs of licensure, policymakers in Alabama should consider substantial reforms to occupational licensing laws, as detailed in this report.

API policy experts are available for interviews and presentations on occupational licensing research. To book a speaker or schedule an interview, please contact Taylor Dawson, Director of Communications, at taylord@alabamapolicy.org